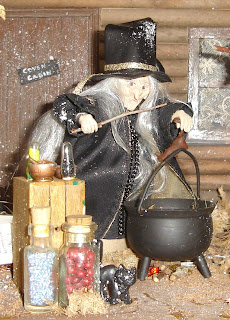 ﻿
Above is a picture of my Hallowe'en witch, which I made in 1998.  She lives in her roombox which I called "The Witches Brew".  Maggie is busy making her spells, carefully watched by her black cat.

Black cats were originally believed to protect witches' powers from negative forces.  You can see the full roombox on my website under "Dioramas" Id. no:  (Dioramas) Wales - 0028.
When looking at her recently, I began to wonder when Hallowe'en actually came about.  I have since found out the following information:
According to Irish legends, Jack-o-lanterns were named after a man who could not enter Heaven because he was a miser.  He could not enter Hell either, because he used to play jokes on the devil.
Originally, lanterns were made out of  turnips.  Today people put lanterns made out of pumpkins outside their homes to frighten away ghosts and witches.
Hallowe'en dates back to the ancient Celtic Festival of Samhain, which is a celebration of the end of the Harvest Season.﻿
Hallowe'en is on the eve of All Saints Day, or All Hallows, which is an ancient word for saint.

ps. my Halloween dolls and photos in http://nukkekotinukke.blogspot.com/2011/10/scavenger-hunt-sunday-2310.html

Thank you Nukke. I love your Hallowe'en dolls too. They are so colourful! Carole.