MY SPECIAL VISIT TO SPAIN (and a Basque doll)

I have just returned from a very memorable visit to Bilbao, Spain.  I feel very privileged to have been invited to submit some photographs of some of my dolls to go into a Spanish cookery book, and to be invited to the launching of the book in Spain.  When I arrived in Spain I was taken to the local Radio Station to be interviewed, via an interpreter.
The book is pictured below and is written in Spanish but it is hoped that it will be written in different languages in due coarse.  It is a cookery book with a difference and was written by members of the group - "Mujeres del Mundo Babel" (http://www.mujeresdelmundobabel.org/) which is a group living in Spain but a lot of the members were originally from many different countries around the world.  There are traditional recipes from twenty different countries with some of my doll pictures by the side of each appropriate recipe.  There is also a little about the culture of each country.
The dolls pictured below are dolls which I brought back from Spain.

To see more pictures and information about the dolls, please see the website.  Carole.

This delightful doll was specially made for
the event by one of the members, and it was
given to me at the event.

NERE ATXIAGA- the maker of the doll,
preparing for the evening event.

SPAIN - (traditional Basque dancing costume)
Website Id:  Europe - Spain - 0028
This doll was given to me after the event, by a delightful Ethiopian lady:
Elsabeth (Elsa) Teklu Casa

THE COOKERY BOOK
written by members of the group.

One of the pages of the book.


Me with the Basque doll 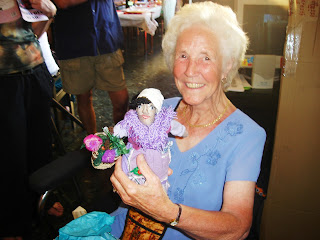 Some of the members of the group
dressed in their national costumes.﻿

Dancing couple
"GINGER" the little kitten
who was stranded in the bushes
on the left, close to a sheer drop and rocks below -
(rescued by my friend and I).
It was a very eventful trip!


MUNDAKA HARBOUR
(a little village where my friend and I stayed).

That Basque doll is super and so cute that Marijala Festival doll too !!! I'm sure you had wonderfull time there in Spain.
Thnaks for your comment :)

Thank you Nukke. Yes, it was a fantastic trip! Thank you for your comment, too. Carole.

Carole and Cris it was great having you at the "Saborea la Interculturalidad en Bilbao" book reception event. Coming all the way from Walles was a significant contribution to the visibility of the book project. And over all, bringing the beautiful dolls to share with the Bilbao society.
Thank you for sharing the experience with Mujeres del Mundo Babel from Bilbao.