On this Blog I am showing you just a very small part of St. Fagans Museum, South Wales, and also TWO SHALLOWPOOL DOLLS.
ST. FAGANS MUSEUM
(South Wales)
I have recently visited St. Fagans Museum in South Wales.  I found it so interesting that I thought I would share it with you.  At St. Fagans there are over fourty original buildings from various historical periods in Wales that have been re-erected at St. Fagans.  You can find all the information and lots more pictures on their website at:   www.museumwales.ac.uk/en/stfagans
For more information about the SHALLOWPOOL DOLLS please see my website.
* * * *﻿
St. Fagans open-air museum is set in 100 acres of parkland in the grounds of St. Fagans Castle, South Wales.
The first picture shows a farmhouse which was originally built C.1470, and was called Cilewent.  It was originally situated in Cwmteuddwr, Rhayader, Powys, in Mid Wales.  The original walls were rebuilt in stone in 1734.  It is called a "long house" with cattle living at one end and humans at the other end.  All that is left of the original house are the two cruck trusses in the cow house and the timber-framed partition between the cowhouse and the dwelling.  This type of house was once common in mid and south Wales.  The farmhouse was dismantled in 1955 and re-erected at St. Fagans in 1959.  The furniture in the house is C.1750.
CILEWENT FARMHOUSE
* * * *
ST. TEILO'S CHURCH

This church was originally situated in Llandeilo, Tal-y-bont, near Pontardulais in South Wales.  It was built in the 13th. century.  It ceased to be used in 1970, and due to the remoteness, it became a target for vandals and thieves so it was dismantled in 1985.  Re-building was started at St. Fagans in 1997 and finished in 2007.  After extensive research the screens in the church are all carved by hand.
ST. TEILO'S CHURCH
(interior)
ST. TEILO'S CHURCH
the carved screens 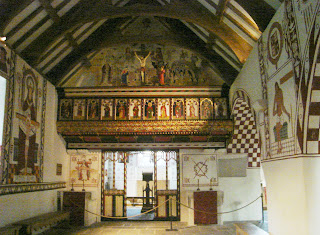 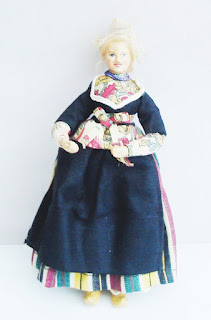 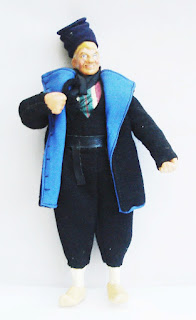