As it is the time of the ONAM FESTIVAL, I thought I would show you these two beautiful Onam Festival dolls.  They are 16.25" and 17" high.
The ONAM FESTIVAL is observed by Malayali Hindus.  It is celebrated in the month of Chingam, between the 28th. August and the 7th. September.  It is celebrated in honour of the mythical King, King Mahabali.  It is believed that his spirit returns to Kerala at this time.
A pooklam (a carpet of flowers, arranged  in beautiful designs, is displayed in homes at this time.

The Kathakali dance is performed and also the Pulakali dance, where performers are dressed like tigers, in bright yellow, black and red.

A boat race called the Vallamkali (snake boat race) is also a traditional event of the Festival, when boats race on the River Pampa.

Onasadya is the grand meal of the Festival, and is served on a banana leaf.  It includes dal preparations, spicy curries, pachadis, sweet and sour pickles, and payasams, with pradhaman for dessert.  There is also banana, salted banana wafers and salt on the banana leaf.

Fireworks, music and spectacular carnivals with elephants, are also a large part of the Festival. 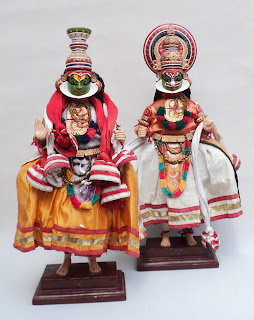 BACK VIEW OF THE DOLLS 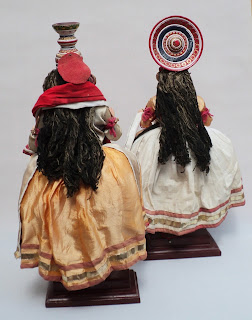 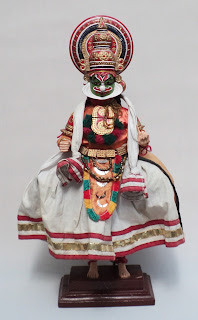 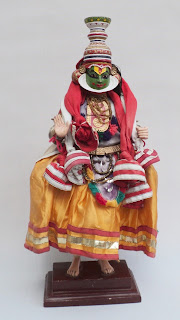 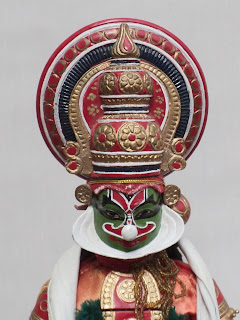 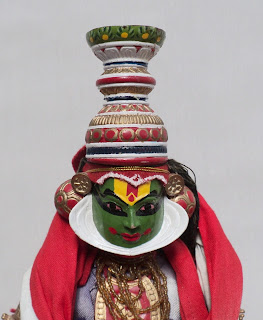 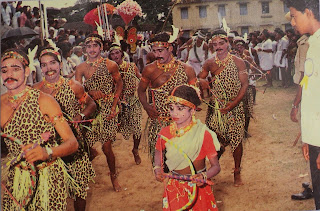 Posted by World Costume Dolls at 06:54 No comments:

Today I am listing dolls from CHINA, LEBANON, INDIA, SPAIN, and VIRGIN ISLANDS.
For more information about the dolls, and more pictures, please see my website.  Thank you.
I will be listing more dolls, time permitting.

Over the last couple of years I have become more and more interested in foreign costumes and fabrics, and my costume collection is growing rather quickly!  I feel that they tie in very well with foreign costume dolls. 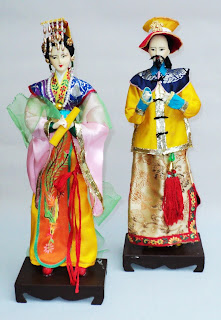 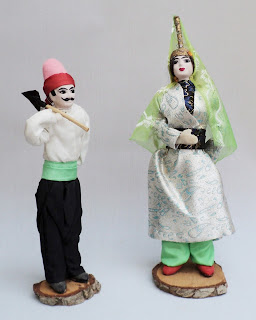 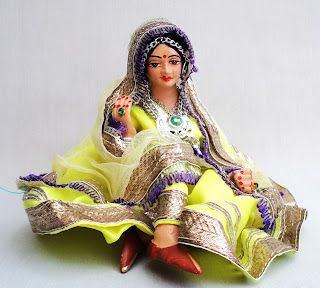 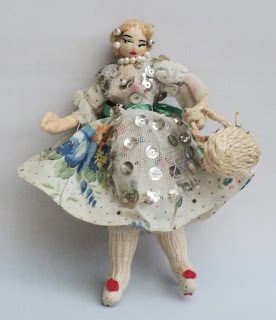 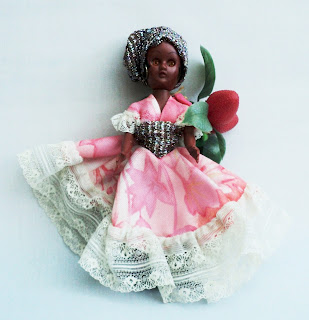 * * * *
Listed here is one of my costumes, a costume from AFGHANISTAN.  The tunic and the trousers look a different colour on the photos, but they are actually the same colour. 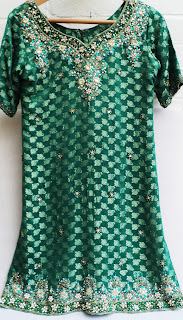 RHINESTONES AND SEQUINS
(decoration on tunic). 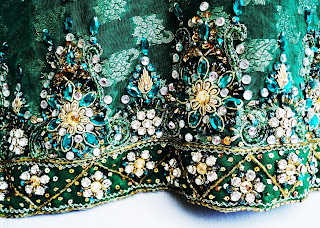 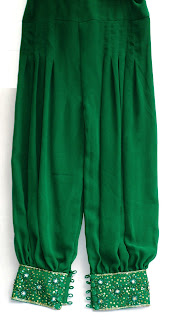 SEQUINS AND BEADS
(decoration on trousers). 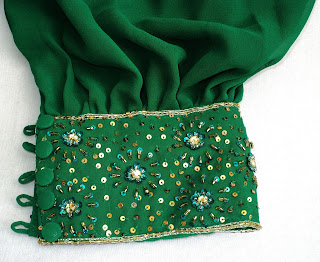 Posted by World Costume Dolls at 13:48 No comments:

MY RECENT VISIT TO THE OUTER HEBRIDES and DOLLS FROM SCOTLAND

I have recently returned from THE OUTER HEBRIDES, SCOTLAND.  As I was unable to find any suitable Scottish dolls when I was there, I am listing some lovely Scottish dolls made by the Award Winning Doll Maker, SHEENA MacLEOD, which I purchased a few years ago.  They are good quality dolls portraying characters of Scotland in everyday working dress.

Their hair is real lambswool and the fabrics used to make their clothes are genuine Scottish tweeds.  The little stools and other wooden accessories were made by Sheena's husband and son, (with the exception of the spinning wheel, which was made in Wales).  The seaweed was collected from the beach by Sheena's daughter.  The tiny knitted garments and "knitting on needles" were knitted by out-workers.  .
The dolls all have cloth over wire armature bodies with clay heads, hands and feet.  The features are painted..

I have also added a few photos from my visit to the Isle of Lewis, and the Isle of Harris (The Outer Hebrides, Scotland), which I took when I was there.  (The weather was not good, hence the photos which are a little dark).

For more photos of the dolls, please see my website.  Thank you. 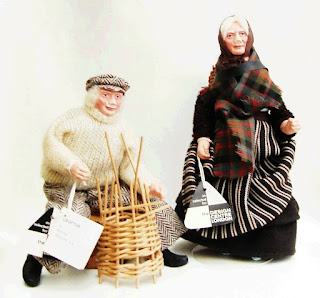 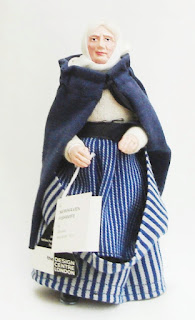 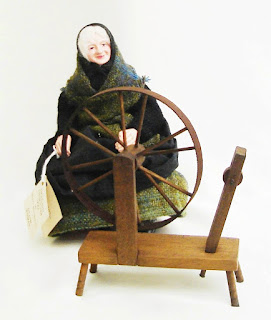 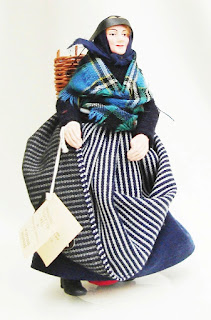 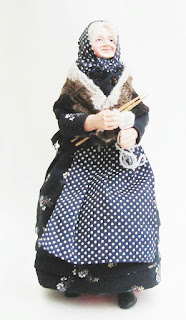 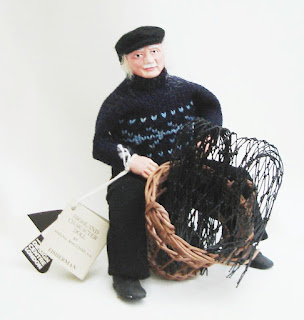 SOME PHOTOS FROM THE OUTER HEBRIDES.
These islands situated on the Atlantic coast, are mostly known for farming on their crofts, fishing and tourism.  The Isle of Harris has beautiful mountains, and the Isle of Lewis is also mountainous, but mostly in the north of the island.  Because of the geographical position of  The Island, it can be wet and windy, hence the noticeable lack of trees in the north of the island.
ISLE OF HARRIS
(A "busy" petrol station) 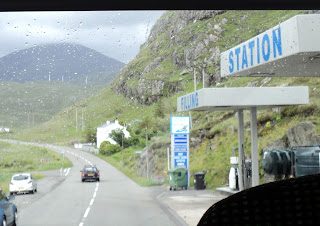 ISLE OF HARRIS
(Taken through the coach windscreen) 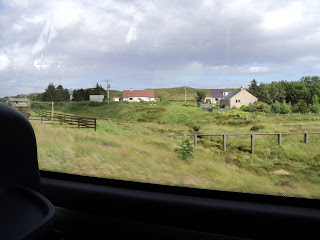 ISLE OF LEWIS
(The Butt of Lewis, the most northerly point of the island) 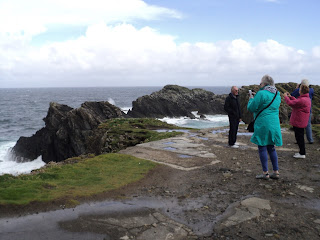 ISLE OF LEWIS
(A traditional Blackhouse built in 1885) 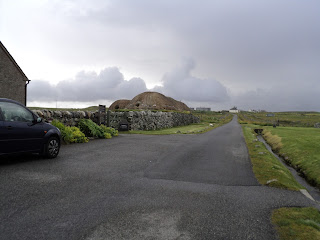 THE ISLE OF LEWIS
(The ceilidh (pronounced "kayley"), the most important
piece of furniture where family and friends sit together to chat)
(The ceilidh is tucked behind visitors legs!) 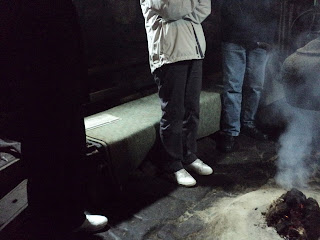 THE ISLE OF LEWIS
(The peat fire in the Blackhouse, with the cooking pot
hanging above.  There is a hole in the ceiling for the smoke to escape). 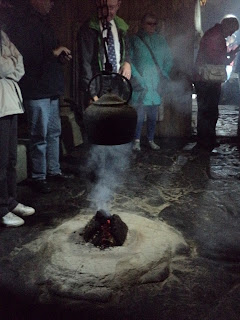 THE ISLE OF LEWIS
"Grandad" sleeping in the box-bed.  It was the job of the grandparents
to keep the fire going all night, as if a peat fire goes out, it is difficult to start again,
although it goes very well when it gets going. 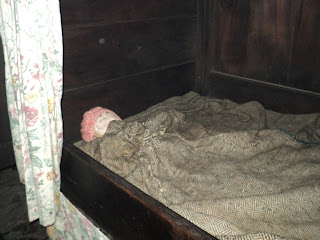 Posted by World Costume Dolls at 04:13 No comments: