THE HAT SHOP:
In 1994 I decided to make a hat shop.  In those days we regularly had Jumble Sales in our town.  It was at one of these that I purchased a real wreck of a dolls house for very little money! It was originally 1/16th. scale.
My late husband knocked it down to the outer shell, made it 1/12th.scale by adding extra wood onto the bottom of the side and back walls, and then made the new front, which you can see here.  He also made the new roof, as the original one had the remains of dormer windows in it, and fitted the lighting.  Finally, he slated the roof using firm card, and grooved the floors to resemble boards, using an old Biro which had run out of ink.

My first job was to "rough-cast" the outside walls using  a mixture of emulsion and seaside sand.  I then painted the woodwork on the front, including the name sign, and added a drain-pipe.
MADAM BELLIS
(The front). 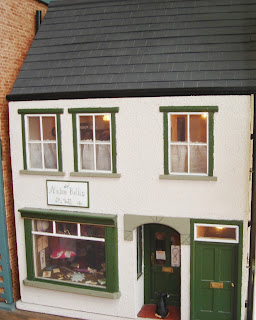 THE HAT SHOP INSIDE:
This room is "L" shaped as the shop door is set back into the porch.  By the time I had this little dolls house I had progressed to a scroll saw, so I made all the furniture with wood, but my late husband pinned the side pieces onto the cheval mirror for me.  I shaped these using a Stanley knife and grooved a pattern on them, again using an old Biro.  I also carved the feet of the counter with a Stanley knife, and finished the counter  by fitting perspex into it.
I used very fine wool on canvas, using a half cross-stitch for the mat, which is my own design.  The bolts of fabric were made by wrapping thin fabric around firm card, and I made all the hats, parasols and jewellery, etc.  The lady in front of the mirror was originally a little costume doll, and the lady behind the counter was originally a little French doll.  I re-dressed them both.
I also made a writing table which cannot be seen as it is around the corner, behind the cheval mirror.
THE INSIDE OF THE SHOP 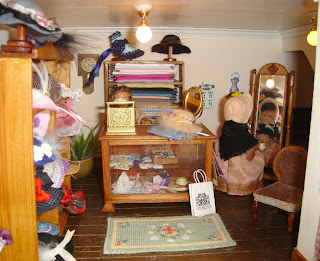 ANOTHER VIEW OF THE SHOP 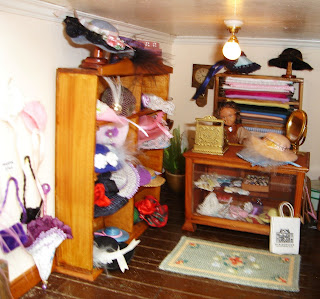 THE TAILOR'S ROOM:
The doll I have used for the Tailor was another little doll from a Jumble Sale, which I re-dressed.  I have called him "Harry Gibbs" - the name of a man I once worked with.  (He had spent most of his previous working life as a tailor, so I thought it was an appropriate name!)
I carved the legs of the table using a Stanley knife, and made the black stove using a piece of wood which I cut off an old broom handle.  I added bits on for the doors and also wooden bead knobs, which I painted silver.  The coal in the bucket is real.  For the clothes rail I used dowelling which I painted silver, and cut out the coat hangers using the scroll saw.  I also made the jackets and trousers hanging on the rail, the shelf unit and bales of fabric on the right, and the folding screen.  For the latter I used very thin real wood purchased from a dolls House Shop and cut out lots of tiny pictures out of magazines, glued them onto the screen and finally varnished over them.  The besom was very easily made using a small length of dowelling and some bristles off the old sweeping brush.  (Nothing goes to waste!)
THE TAILOR'S ROOM 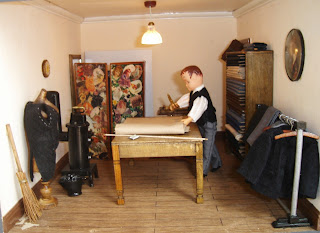 THE LANDING:
This was very soon done!  Once again, I "carved" the table legs using a Stanley knife and trimmed the top of the table with some wooden beading.  Above the table is a little wooden wall shelf, cut out with a scroll saw. On the opposite wall is the mirror which I also made.  The actual mirror was bought in a Jumble Sale and I framed it with wood, adding a small shelf, on which I have put a pair of gloves which I made out of some thin leather.  Below the mirror is Harry's coat and his black umbrella in a "brass" umbrella stand.  The handle of the umbrella is welding wire and I covered it with electricians plastic "sleeving" which happened to be in the shed!  Harry's parcels are by the bannister waiting to be posted on his way home. ( I addressed three of these to my three grandsons). 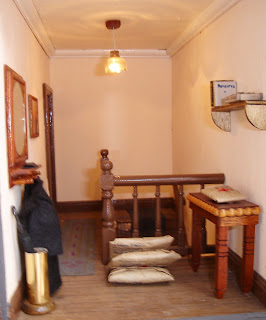 * * * *
NEWSPAPER CUTTING OF MADAM BELLIS
in front of the dolls house.
(my late father-in-law's grandmother).
Unfortunately this is the only "photograph" we have of her.
On the back of the newspaper cutting is and advert for "The ALEXANDRA FEEDING BOTTLE" and "Manufactured by: S. MAW, SON & SONS, LTD  Glass screwed top bottle".   (My daughter has traced the manufacture of the bottle back to 1901-1918.) 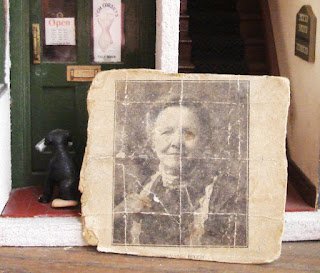 Thank you! (I am sorry I don't understand all your Spanish (?) comment).

Again outstanding work, craft and finely executed detail! I'm amazed how you ( and husband) did all this! Some great ideas for use of everyday household object and attention to the time period is remarkable. - Margaret

By the way, I googled the Spanish translation, which says:

"That precious details in that wonder of small house.
little kisses ascent"

Thank you Margaret. I really enjoyed working on it (as I always do!) Thank you also for the translation of Ascension's comment. I hadn't thought of doing that. Carole.