"KUANTAN"
(MY MALAYAN DOLLS HOUSE)
Copyright © 2013
Licensed Exclusively to: World Costume Dolls
I bought this little dolls house in a market in 1996, after falling in love with it.  It did not open, but I could see possibilities so we made it opening at the back.  Because of the shape of the centre "roof", we had to put two doors in the back,one above the other for each floor, instead of one.
Originally we could peep through the curtains and see that the one room was papered with a very unsuitable wallpaper, which I removed.  I made non-closing doors on the front, as there weren't any there originally.  To make the palm tree on the left I used a suitably shaped twig and covered it with beech shells from the local park, and then I couldn't resist adding the little monkey to it, which was originally a 'fridge magnet from a Charity Shop.  I bought the little round stone sign above the door on the upper floor, in India, a few years before.  (I thought it would come in handy sometime!)
I have put various potted plants and tiny chickens etc., around the outside of the house.
KUANTAN (the outside)
(Website Id:  (Dioramas) Asia - Malaysia - 001) 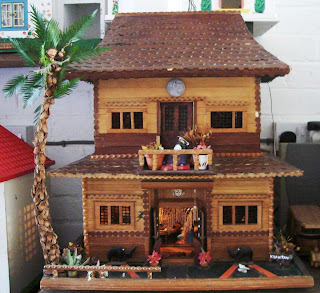 I made the open staircase.  Because of the height of the room I added a small "platform" and a few more stairs leading to it.  The black bars on the windows were made from a roll of plastic garden edging.  I made the wooden cupboard on the left hand side with  opening doors and drawer, stained it brown and painted the decoration on the front.  The carpet is the back off an old handbag bought in a Charity Shop and the low table was originally a brass coasters holder which I turned upside down so that it had legs. I cut a round piece of wood in two halves, to fit around one of the coasters which I glued onto the top of the table, to resemble a brass top. (The coaster wasn't wide enough without a wooden surround).  The coaster set was also a Charity Shop buy.
Across the doorway is a beaded pelmet which was originally part of an old damaged collar, so I cut it to fit the width of the doorway and knotted it so that the beads wouldn't fall off, and yes, you've guessed it - it was another Charity Shop find!  The large fan above the doorway was actually an earring!  The fruit etc. on the table were originally 'fridge magnets, the scented cushions on the floor around the table are made in Indonesia and were new in Oxfam, and the clay dolls were also from Oxfam, as was the mirror on the wall, and the black and gold trunk below the window.  The mandolin on the floor in front of the table was part of a keyring, from another Charity Shop.
Finally, I covered the walls with hessian sacking and made the lampshade with tiny bugle beads.
This just goes to show that working on dolls houses does NOT have to cost a fortune, and personally I had a lot of satisfaction from working on this little house in this way!
KUANTAN (the downstairs room)
(Website Id: (Dioramas) Asia - Malaysia - 001A) 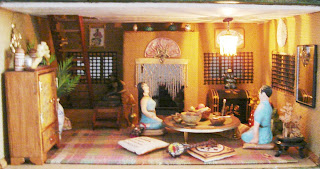 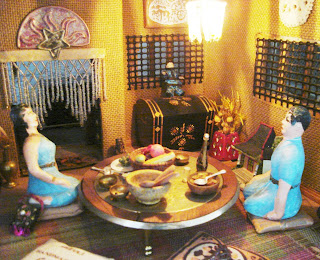 ANOTHER VIEW OF THE WOODEN CABINET
(Website Id:  (Dioramas) Asia - Malaysia - 001C)
For the long ornament on top of the cabinet, I saved a small curved bone off a cooked chicken, and on top of it I fixed some tiny little plastic(?) elephants which I had given me by a dolls house friend. 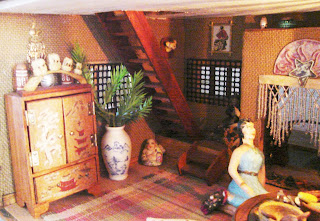 THE BEDROOM
(Website Id:  (Dioramas) Asia - Malaysia - 001D)
I made the very basic wooden bed and the bedding.  For the folding screen I used wood and covered it with some silky fabric from a Jumble Sale.
The bannister is also made of wood, which I filled in with some more plastic garden edging.  I also put it on the windows.  The large "sundial" on the left hand side wall is a piece of straw which I cut out of an old handbag.  The various little ornaments around the room are all bits and pieces which I collected from Charity Shops.  The guitar on the bed was originally with a tatty Spanish doll which I had scrapped. 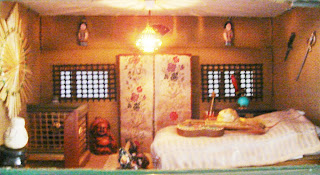 THE BEDROOM LAMPSHADE
(Website Id:  (Dioramas) Asia - Malaysia - 001E)
The "lampshade" was actually one of a pair of ear rings from a Charity Shop.  My friend and I had one each of the pair.  (We always used to share our little finds!).  It is actually green and gold enamel, but it doesn't show up very well in the photo.
I am not sure where the house was made, or anything about the history of it.  Now that there are two rooms in it, it is approximately 1/12th." scale.
If you click onto the photos you will be able to see the detail a little clearer.
* * * *
I really enjoyed working on this little house, as I am particularly fond of making foreign scenes, (as you can see by my Dioramas!).
* * * * * * *