MY FIRST ATTEMPT!
(at making dolls house furniture).
In approximately 1995 I fancied having a go at making some dolls house furniture, so I bought a very poorly made dolls house from a Charity Shop and began making the furniture you see below (with the exception of a couple of pieces), to put into it.  I later scrapped the dolls house as it was so poorly made, and put the furniture into the Tri-ang dolls house which you can also see below.  It is the BROOM HOUSE (1996 to 1971), which was the last of the Lines Bros. dolls houses to be made.  It is 1/16th." scale, so I made the furniture accordingly.
The furniture was all made with wood (and fabric where appropriate).  At the time I made all the furniture using a fret saw.  I did all the "carving" with a Stanley knife.
Originally there was also a music room and a ballet room but there was no room for it in this dolls house!
RADNOR HALL
(the Drawing Room upstairs and the Day Room downstairs).
The chest of drawers and the table by the back wall (the latter is too big!) are both from Charity Shops.  The plinth holding the metal statue on the left is a wooden cotton real.  I just added a couple of circular pieces of wood for the base, and then "marbled" the whole thing by dipping a feather in white paint, and squiggling it on!
The two dining chairs were marked on the back with a Biro which had run out of ink, to create a pattern.
The "marble" fireplace was made in the same way as the plinth upstairs, and I made the blue carpet to my own design using a half-cross stitch on fine canvas. 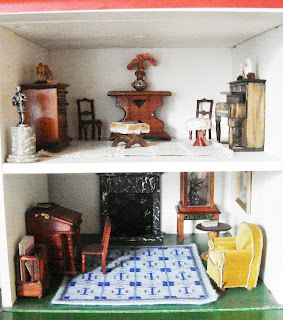 The left side of RADNOR HALL
On the top left is the small Art Gallery in need of some pictures.  I made the wooden screen with pieces of marquetry from a local factory.
On the top right is the "landing" (there are no stairs).  The wooden bench and dining chair have again been decorated with an empty Biro.  The mat was cut from an old piece of fabric.
THE LIBRARY is downstairs and the bookcases were the first thing I ever attempted in woodwork!  I also made the carpet in the Library to my own design. 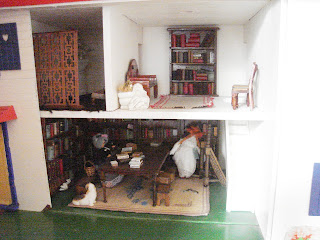 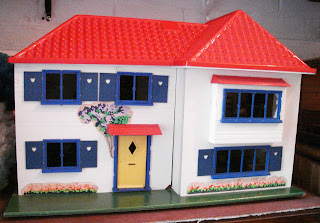 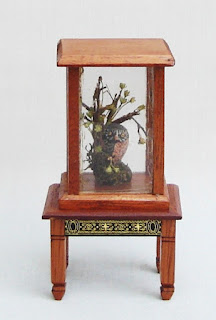 THE TABLE AND DISPLAY CASE. 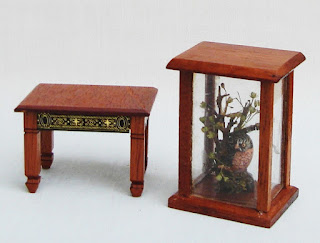 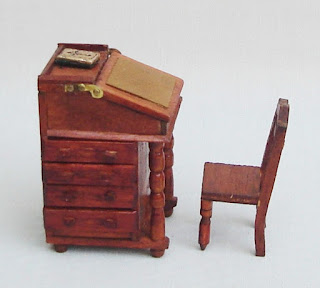 DAVENPORT DESK
(with lid and drawer open).
Again, I shaped the legs of the desk and the chair by using a Stanley knife.  My late husband fixed the hinge on the desk lid for me.  He made the hinge himself by cutting it out of a thin piece of metal. 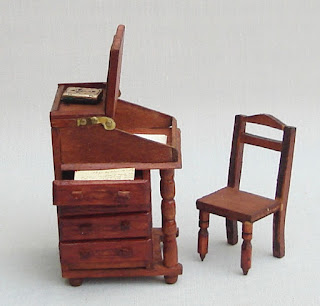 LIBRARY STEPS
More Stanley knife work here!  After roughly shaping the top of long support handle I smoothed each section of the handle with sandpaper to get the pattern as "rounded" as possible.  There is also more Biro pattern work on both sides of the steps. 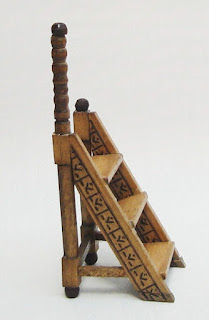 THE PIANO
The top has been bevelled, the legs shaped with a Stanley knife, and my late husband fixed the lid on top of the keyboard for me.  The "keyboard" was a free cut-out from a dolls house magazine, glued onto a piece of thin wood.  I carved the legs, again with a Stanley knife and shaped the "brass" pedals with a fret saw.  The little mermaid ornament is off a cheap tie-pin. 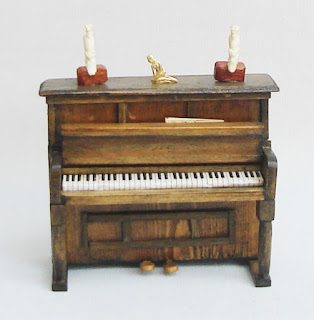 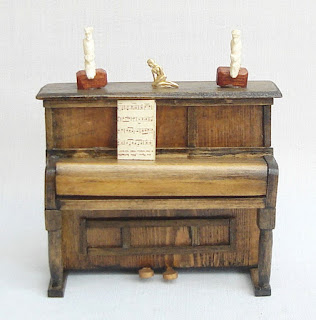 I really enjoyed making these items at the time, so I then bought myself an electric band saw!