MY IRISH COTTAGE
(GLENCREE)
1/12th." scale
Copyright © 2013
Licensed Exclusively to: World Costume Dolls
In 1999 I was given a large sheet of 3/4" thick MDF by the Proprietor of a local Do-It-Yourself Store.  I was told I could have it as it had some damage to the edges and it was going to be thrown out.  When it was later laid out on the lawn I looked at it and thought - "that's my Irish Cottage", hence, GLENCREE!  I have based it on an Irish cottage C.1890, so I did not want electric lighting in it.  It is 1/12th. scale.

I bought a plan for the cottage but didn't use it after as the cottage had no front!  Anyway, I always prefer to "do my own thing", so that's what I did.
It is an old Irish tradition that an Irish cottage can have rooms added onto the length so that it is just one row of rooms deep but there mustn't be two rooms, one behind the other.  It should also have two outside doors opposite each other in order to circulate the draft.

My late husband cut the wood into manageable sizes for me and I went on from there.  After working out my own plan I marked and cut out all the pieces, that is the outside door holes, the windows which are by tradition, four paned, and the two "holes" for the fireplaces, and I eventually glued them altogether.  I was given some Artex by a relation who is a plasterer by trade, and hey presto - I was away!  In my enthusiasm it occurred to me that I hadn't cut the doorway out in between the two rooms!  I got round it by making a false door!  (Very ingenious, I thought!).
This was the basics done so next I painted the cottage with Uni-Bond to give the Artex a grip, and then gave it two coats of Artex, inside and out.  By now it was beginning to look a bit more like a cottage and not like a box!
Next came the exciting part!  My husband drilled around the top of the side walls so that I could fix the purlins (dowelling) into position.  Over these I glued batons in a vertical position and held them in position with wooden clothes pegs (a wonderful invention!) until they were dry.  While this was drying I fixed the doors into position (quite a hassle!) and painted the floor to resemble an earth floor.
Next came the bit I was REALLY looking forward to!  I was about to start thatching the roof!  For this I used coconut hair which I fetched back from Sri Lanka.  We were going along in a taxi and noticed a farmer in a field with a load of coconut hair spread out in the sun to dry.  I got the taxi man to stop and he went and asked the farmer if I could have some.  Simple as that!  He wouldn't charge me so I gave him some rupees.
My two grandsons helped me to tie up loads of 3/4" long bundles of the coconut hair, and after covering the roof with sacking (which I think is better than felt), I gradually glued on loads of bundles.  I estimated that I had made about 750 bundles.
I now had my Irish Cottage for which I made the dolls and all the furniture, with the exception of the chair in the bedroom.
* * * *
THE OUTSIDE OF "GLENCREE" 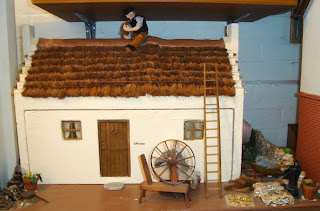 SEAMUS MURPHY
(Repairing the roof after a bad winter)
The hacker which he is holding was made by my late husband, and it is an exact replica of the one his father used to use, many years ago. 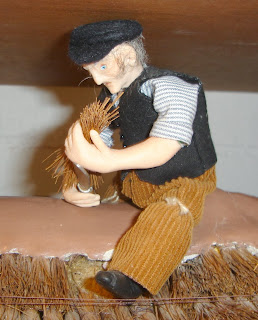 THE PARLOUR
Mr McSweeney is enjoying his glass of stout and taking it easy.  I made the settle he is sitting on with 30 years old oak, given to me by a local coffin maker!  The ladder was made by my late husband.  He drilled holes all the way down both sides and fitted the rungs into them.  (He also made the ladder in the front of the house, leaning against the wall).  It leads up to a large shelf which is where the family dry the peat and store other items, also.  I made the hams hanging from the ceiling, with Fimo.  The linen press on the right has opening doors. 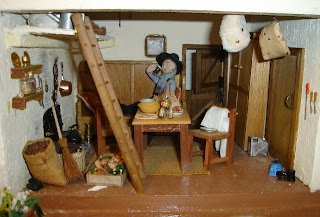 THE KITCHEN TABLE
The food has all been made with Fimo.  I made the oil lamp with bits of filigree.  The glass top is from an old fuse (if I remember correctly!). 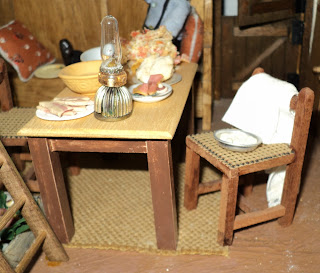 VEGETABLES
I used Fimo to make all the vegetables and used some more of the coconut hair which I glued onto some dowelling, to make the besom (broom). 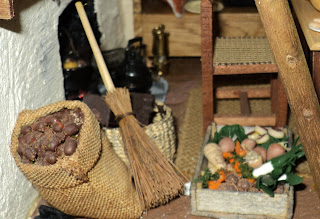 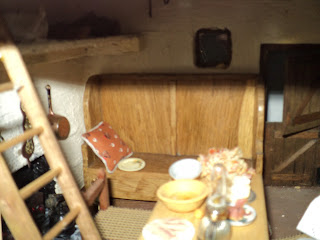 THE BACK DOOR
The open linen press and the chair.  The seat of the chair is fine tapestry canvas. 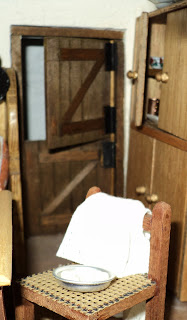 THE BEDROOM
The bed is in the wall with clothing stored by the side of it.  The chair is from a Charity Shop and my husband made the oil lamp (on the floor on the left) by using all tiny parts of scrap metal found on a garage floor. 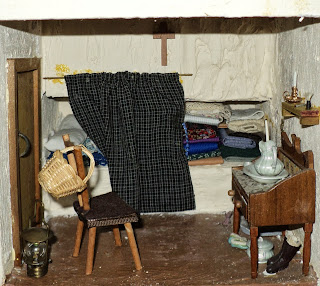 THE WASHSTAND
I used a scroll saw to cut the pattern out on the back, to my own design, and I painted the miniature tiles at the back and baked them in a friend's kiln.  I shaped carved the legs using a Stanley knife. 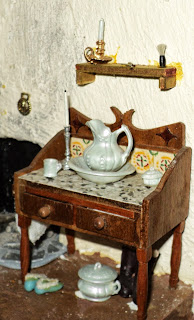 MY TREASURED OIL LAMP
(made by my late husband) 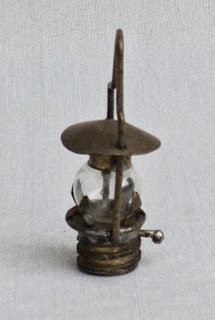 THE GARDEN AT "GLENCREE"
I brought the stones for the wall back from a visit to Croatia, and glued them in place with Polyfilla.  The vegetables were made with Fimo. (I purposefully wanted them to be "falling down" near the front, to add a little realism).  The shepherds hook leaning against the wall was made by my husband.  The water pump is a pencil sharpener. 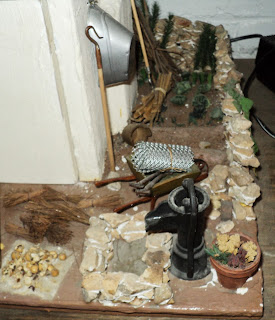 Oh my goodness, this cottage is so adorable! Your diorama's never cease to amaze me. I never thought to use coconut fibres for a thatched roof. I used an old broom for my Polish cottage, but your idea makes it look that much more real. Great attention to detail in all objects and furniture. You must have the patients of a saint to have done it. Thank you so much for sharing!

Thank you Margaret. I am pleased you like it! I really enjoyed making it and I just wish I had the time to do more, and the space!. The coconut fibre worked very well (and it was free!).

Seamus Murphy did a great job thatching the roof, its brilliant, just love the half door at the back and all the different items inside the cottage. Wonderful attention paid to detail. You are talented Carole and it seems your husband was too. Well done.

Thank you Ann. "Seamus" worked hard on the roof! I am pleased you like the cottage. I enjoyed working on it. Carole.