MY DOLLS HOUSE
(TREMONT VILLA)
Copyright © 2013
Licensed Exclusively to: World Costume Dolls
This is a new page for one of my dolls houses.
My houses will be shown on the Blog, but not on the website, as dolls houses have been my second hobby.  My first hobby is of coarse, DOLLS.
I have started by listing "TREMONT VILLA", and will list more houses, time permitting.  (Other dolls houses will probably be on seperate pages).
TREMONT VILLA
THE FRONT

In 1989 I intended having a go at making myself a dolls house, as I no longer had the one from my childhood! At the time, I was thinking of making one out of a cardboard box (oh dear!!), but my late husband felt sorry for me and said he would make me one.  This is the result.
We bought a plan but he altered it, as on the original plan all the rooms were one up above the other and all the doors were at the very front of the house, which I didn't think looked realistic at all.  It looks much better with staggered doors.
He carved the chimney pots instead of having them straight, and he also carved all the bannister rails with a fret saw.  (We didn't have a band saw at the time).  I also asked him to make the top, right hand room (bathroom) smaller, so that I could have a bigger top landing.  This again, looks more realistic as the three corridors were all the same size, and straight and narrow.
He also made all the windows and fancy surrounds and doors, fireplaces and kitchen range, by hand..
The house is 1/12th." scale.
(The house is in a difficult position for me to photograph because I can't stand back far enough, so it is on an angle, here).
THE DRAWING ROOM 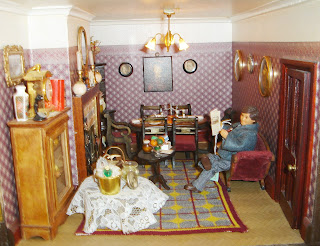 John made the table and chairs without a plan.
He copied the design out of an Antiques Book.
The chaise-longue and the glass cabinet were his own design, and the cabinet door opens.  The tiles  on the fireplace are miniature ceramic tiles, and there is real coal in the grate.  Some of the photographs on the walls are tiny real photos of some of his family.
I dressed the doll and made the carpet square to my own design, by working a half cross-stitch
on thin canvas.
THE HALL
(and James the Butler)) 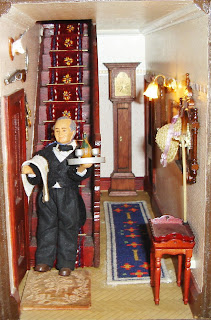 I made the carpet runner by working a cross-stitch pattern on canvas, and the stair carpet by using a piece of fabric off an old skirt.  The "mat" James is standing on was a very old padded piece of fabric out of a tiny scrap box which was bought in a Jumble Sale.  The grandfather clock and small table were bought in a Dolls House Shop.  I dressed the doll.
THE BATHROOM. 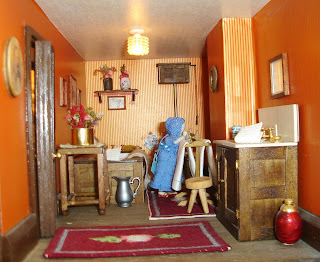 The bathroom suite was made from a kit.   I made the table and John made the three-legged stool and the towel rail.  I made the mats by embroidering my own design on  pieces of sacking cut from an old potato sack.  I then backed it with cotton fabric.  The pots were made with beads and bottle tops and the "pewter" jug is plastic, and was bought in a Jumble Sale.
The little doll is an old parian doll C. 1900.  She is jointed at the hips and shoulders.  I knitted her blue outfit. 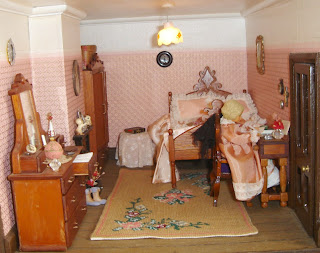 John made the beautiful bedroom suite.  All the doors and drawers open.  The wardrobe has a drawer in the bottom and a rail inside.  The dressing table has a swing mirror which he hand-carved.  The bed is a little beauty!  He actually hand carved the headboard, too.  I made the satin bed covers with peach silky fabric, edged with cream lace.  John made the writing desk with a drawer, and the chair.  There is a very pretty small fireplace in this room, which John made, but it is not showing in the photo.  I made the carpet square to my own design, by drawing a floral pattern onto fabric, working in half-cross-stitch, and then backing it.  I also dressed the doll. 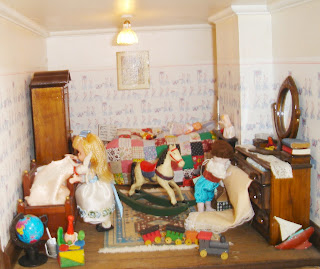 This room is a little untidy because the children
have been playing in it!  As my husband was not well, the furniture in this room was bought.  The toys are from a Dolls House Shop and the little mat on the floor was also bought, as it was a present to me.  I made the patchwork quilt on the bed.  It has 130 squares in it.  The little girl on the left is busy putting her toy rabbit to bed and the little boy on the right, rummaging through the drawer, is a little parian doll C. 1900, which I dressed myself.  He is jointed at the hips and shoulders.  The wallpaper is a copy of a Victorian children's wallpaper.

THE SERVANTS ROOM
(The Housekeeper is married to the Butler) 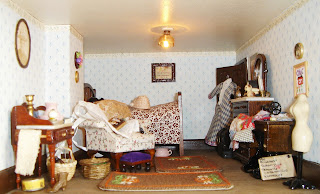 As my husband was not well at the time, the dressing table, chest of drawers and the armchair was bought.  He made the bed and the washstand with a tiled top and opening drawers.  There are miniature photographs of some of his family in this room, too.
I made the matching mats to my own design, by drawing a pattern on some finely woven fabric and embroidering it.  I then backed it with a plain cotton fabric. 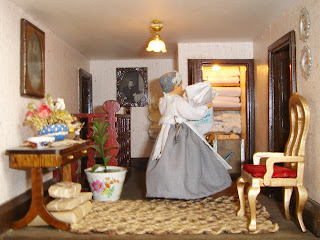 Here again you can see the fretwork bannister. The table and the gold coloured chair were bought.  The chair was a cheap one which I bought in a market, and I painted it gold.  The mat was simply cut out of an old soft basket.  The large picture on the left wall is an old one which was inside a damaged case which I bought in a Jumble Sale. It is a picture of a Victorian lady.  The large flower pot holding the green plant is a miniature Dresden pot, again bought in a Jumble Sale, years ago. The blue and white pot on the table is half an acorn, which I painted.   I dressed the Housekeeper and made all the linen sheets and pillowcases
etc., in the linen room.
THE KITCHEN 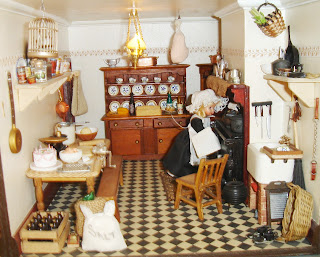 The lovely old fashioned kitchen range was made by John.  The doors all open and the hobs lift up, but unfortunately they cannot be seen in the picture.  He also made the corner cupboard (slightly out of sight), the kitchen table and bench, the wooden chair and the dresser with opening doors and drawers.  The dishes on the dresser are gun metal on which I painted a pattern.  I dressed the maid who was originally a small French doll.  John also made the sink and draining board.  Above the sink is a tiny piece of seaweed.  No self-respecting Victorian kitchen would be without this, as they used it to tell what the weather was going to be like. 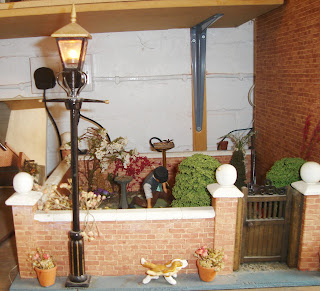 Henry is busy weeding the flower bed.  John made the garden and I did the flower beds and grass.  He made the lampost out of all sorts of tiny bits and pieces off the garage floor.  The gold top part is wood.  The gate he made is beautiful.  It even has a tiny working latch!  The round balls on top of the brick pillars were bought in a Florist Shop.  They were scented at the time but I had to paint them. There is a very tiny snail-shaped shell on one of them.  My grandson, who was about three years old at the time, brought it back from the beach for me, to put in the garden.  I made the little bird table and there is a stone bench in the garden with lion supports.  The little dog who is running away from the Butchers Shop, was bought in a Jumble Sale. 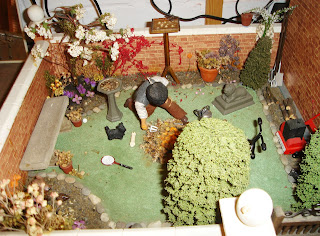 The sundial in the left corner was a little brass ornament.  To make the "stone" lion in the right corner, I used a plastic toy lion and glued it onto two different size wooden bases, and then glued them together.  Then I painted it grey.  The larger green bushes were bought in a Dolls House Shop and all the small flowers are artificial ones which I cut to size.  I used brown scatter for the soil.  I dressed Henry, the gardener. 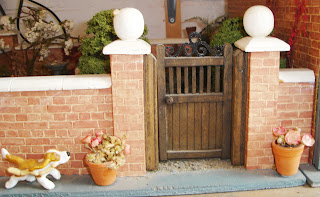 And finally, here is a closer look at the gate  (and the little dog with the sausages!)

WOW! I am really impressed with this large scale project you did, all those rooms to fill up and a lot of it was hand made?
Best miniature doll house that I've ever seen with family and servants going about their business. Looks and feels very Victorian era, great job!

Thank you for your lovely comment. Yes, most of it was hand made, except for the furniture in a couple of rooms. My husband put a lot of hard work into making it. I am so pleased that you like it. (He would have been, too).

He must have been a very talented man and the pieces he made are much better than the shops sell. It's so interesting to hear how you made all the bits, I'd never have guessed how most of them started out. You're little people have such a wonderful home!

Thank you! It is a very special house to me, and yes, my husband was very talented. I am so pleased you like the house.