A BRIEF HISTORY OF THE WELSH COSTUME
(Welsh women) 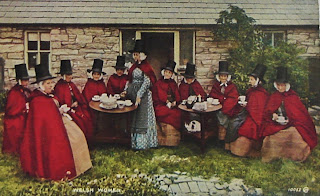 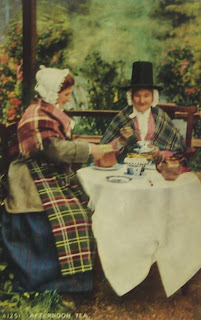 The Welsh costume is based on the peasant costume of the 18th. and 19th. centuries.  Many of the costumes were made as hard-working clothes.  Although the peasants were poor, the well off were well dressed.
In the 18th. century, cottagers spun their own cloth in the natural colours of oatmeal, grey and white.  The wool from sheep reared on the farm was spun on a spinning wheel in their homes.  Some used to gather sheeps wool off the hedges in the countryside.  This would also be spun at home on a spinning wheel.  At a later date they were dyed bright colours.  Linen was also a home-produced product which they made into shirts and sheets.  (They also used to make their own beer).﻿
The Welsh costume was mostly developed in the 19th. century, partly to revive the Welsh culture and to promote the Welsh language.   Clothing was given as part of wages.   The Welsh costume varied in different parts of the country, such as in Tenby and the Gower regions where the dressses were of Flemish origin with a short jacket.
THE WELSH SHAWL..  The shawl was very fashionable around 1840 to 1870. They were mostly paisley patterned, but were also plain and checked.   One of the traditions of wearing the shawl was to carry a baby in, and these traditions are sometimes kept up today.﻿  In the coastal areas the shawls were usually red but sometimes they were of a black checked pattern.  Carmarthenshire colours were red and black, Cardiganshire was dark blue and red and Pembrokeshire was burghundy, black and dark brown.  In North Wales they were dark brown with yellow and violet, and also some grey.
STOCKINGS AND FOOTWEAR.  Maids would wear hand knitted stockings and clogs but their mistresses would wear shoes or boots with leather soles.  A best pair was often kept for special occasions.  Shoes were expensive so they would be well looked after.  A young Welsh girl would often carry her shoes in a box on the way to Chapel, and would only put them on when reaching the main road, after washing her feet in a brook first.  She would then put her clogs into the box and hide it in the hedge until later.
﻿ PETTICOAT.  A striped flannel petticoat was worn, and also an open-fronted bedgown (betgwyn), an apron, a shawl and a cap.
HATS.  The hats worn in the 19th. century were the same as the ones worn by the men at that time.  The tall "chimney-style" hat didn't come into use until the late 1840's.  Straw hats were often worn instead of the typical Welsh hat as they were more practical in rough weather.  A white cap, which was usually starched, was worn under the taller traditional Welsh hat.
LADY LANOVER, who was the wife of an ironmaster in Gwent, South Wales, always encouraged the wearing of the costume, not only in her own home, but also in Eisteddfodau as she considered it very important to encourage the wearing of the costume.
Cambrian costumes by Lady Lanover
(Welsh girl in the costume of part of Gwent). 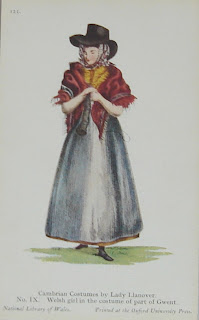 * * * *﻿
THE MALE WELSH COSTUME.
Although some Welsh male dolls are dressed in "Welsh kilts" today, the "Welsh kilt didn't actually exist.  The men would have worn cordorouy trousers or breeches.  For best they would wear suits made of wool which was from their own farm and spun on a spinning wheel on their farm.  Shirts were flannel or linen which had been spun at home.  Linen was also used to make smocks for shepherds.  Fishermen around the Tenby area, South Wales, used to wear a short blue or red coat with white breeches.  Footwear varied slightly between the North and the South.  Leather boots were usually worn in the South and wooden clogs were worn in the North.
* * * *﻿
SOME ﻿REGIONAL COSTUMES OF WALES
(RADNORSHIRE)
Costume of a country woman, 18th. century. 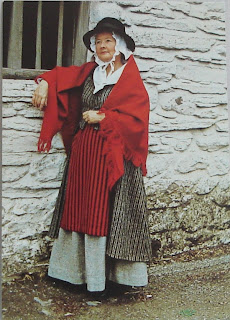 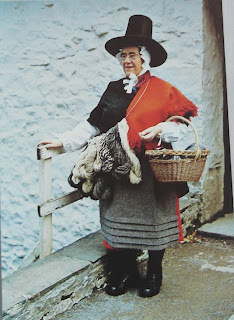 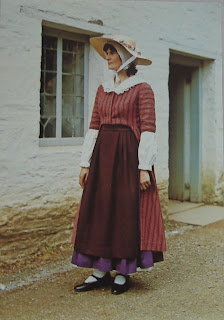 (CAERNARFONSHIRE)
A working costume of a countrywoman, 18th. century. 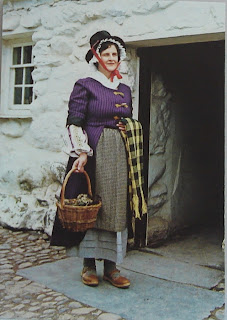 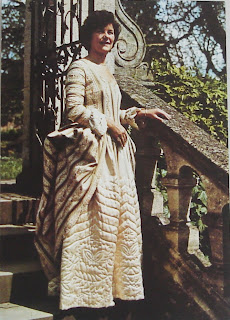 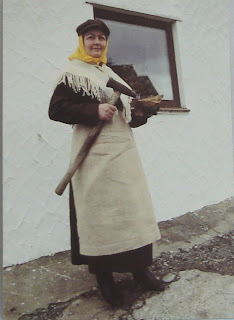 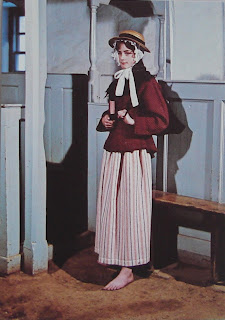 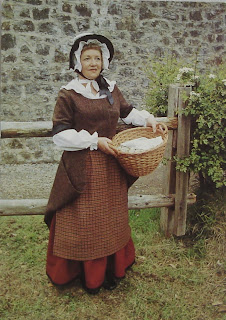 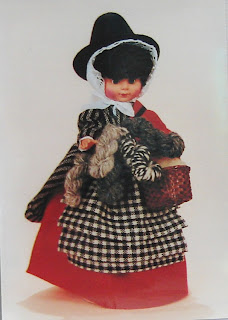 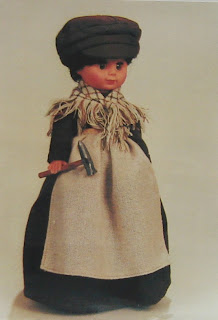 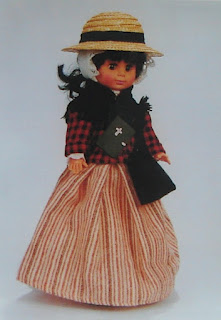 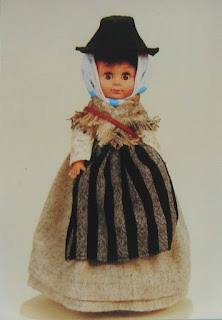 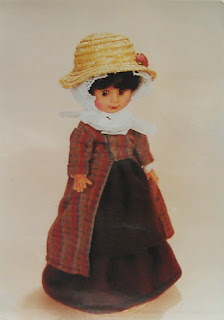 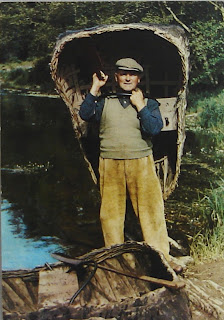 THE CORACLE.  One of the most ancient forms of water transport, known to be used in the primitive days of the ancient Briton's, the coracle is still used on some waterways in Wales today, and also in Ireland.  These fragile﻿ looking crafts are easily carried on land and propelled on water by a simple bladed paddle.
* * * * * * *﻿